Huddy came to us with stories and photos of days when he worked his way around dirt race tracks in Mississippi and somehow ended up for sale in upstate New York where his prior owner found it. 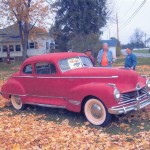 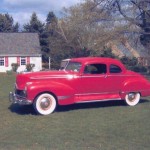 Huddy after a nice bath and some elbow grease.

When John (the prior owner) saw Huddy he had a vision to take a vintage red 1946 Hudson Super 6 and turn it into a fun blue Hudson rat-rod. Below you will see some of how John took Huddy down to the frame, removed the original six cylinder engine and installed a re-built 1972 Camaro engine. 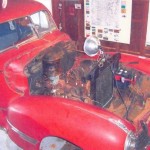 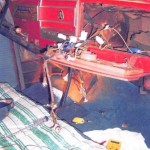 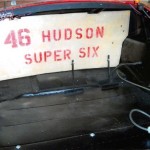 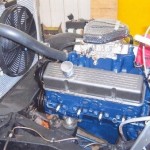 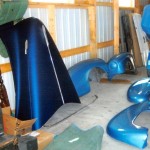 The fun blue Hudson rat-rod is what I saw from the road when traveling to Statesville one morning in 2014. Just outside T & W Tire and Auto on Old Highway 70 in Conover sat this very eye pleasing “old vehicle.” 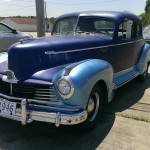 I knew Henry was thinking about a logo for his law firm and having been around Tom Morphis prior to his passing I knew that old cars were something that Tom loved and Henry had fond memories of his father showing up in a different new, old car on a regular basis. For several days I traveled down Old Highway 70 towards Interstate 40 heading east and again and again this old Hudson seemed to be always smiling at me! Well finally, I had to pull in and walk around the car, and noticed it was for sale and felt the need to call Henry.

The first thing Henry said was, “we don’t need to be purchasing an old car.” I described its beauty, its color, how it draws my attention every time I passed by it and how it seemed to be… The Morphis Law & Mediation logo… Finally Henry said, “What kind of car is it?” Well, I don’t know anything about old cars but I shared with him that the tag on the front said, “1946 Hudson.” Henry paused, laughed out loud for what seemed like 10 minutes, then said, “ok send me a picture.” I asked Henry, “why did you laugh and then ask me to send you a picture!” Henry said, “Diddy had a 1946 Hudson Super 8 when I was a kid which was one of my favorite cars that he ever owned and only because it is a Hudson you can send me a picture.” It was not but a day and Henry was test driving Huddy and negotiating a price. It was the perfect look for Morphis Law & Mediation! The car matched what Henry wanted his new law firm to be, something that had a traditional feel but used modern systems.

Once Huddy was purchased he needed to be tagged as the logo for Morphis Law & Mediation. Henry and I looked around at many different options. Henry felt it was very important to match the logo text and wording to a classical look much like the car. We did not want standard or block text on the doors or a magnet, those just did not seem to be the attitude of this 1946 Hudson.

In researching we discovered that Western North Carolina has a hidden jewel in Pinstriping and Lettering, “Wild Bill.” We will admit he is a very hard person to contact. Wild Bill can be found at Harley Bike rallies and roadster car clubs all over the east coast! He has a very unique talent that is not easily taught! Henry was blessed to finally get in contact with Wild Bill and he and Huddy adventured over to Dallas one day for a trip that defined the Morphis Law & Mediation’s Logo. Henry pulled up in Huddy early in the morning and Wild Bill went (you guessed it) wild over what he saw. Bill and Henry discussed what Henry was looking for and Bill said he felt that he could produce what Henry wanted to see. Below are some shots of the process Bill went through to hand paint Morphis Law & Mediation on Huddy. 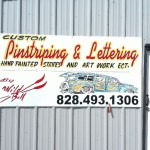 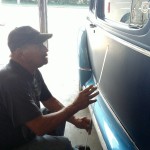 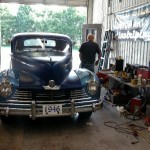 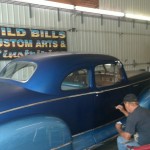 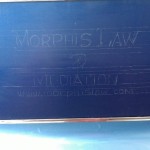 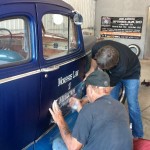 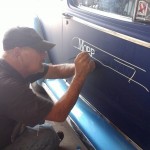 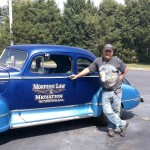 Wild Bill did an excellent job on defining Huddy’s official appearance. Henry shared that Wild Bill has a loyal puppy and pal, Pocket. Pocket makes it to all road trips and pinstriping and lettering appearances.

Huddy now proudly sits outside Morphis Law & Mediation and carts Henry around Catawba County. Don’t be surprised if you don’t see him on a bad weather day, he lets the younger vehicles earn their stripes.

During the Month of May, 2015, Huddy made his first public showcase appearance during Hickory’s Landmark Society Home & Garden Tour. Huddy was placed outside Sebastian Church Chapel at St. Aloysius Catholic Church for viewing during the Home and Garden Tour. 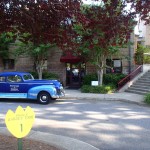 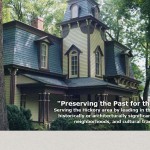 The Hickory Landmarks Society is a non-profit organization committed to serving the Hickory, North Carolina region by leading in the protection of historically or architecturally significant neighborhoods, individual landmarks and traditions. They do this by means of education, advocacy, property management, and ensuring responsible historic preservation as part of community growth.

Should you have an event and would like to welcome Huddy to participate, please feel free to contact Morphis Law & Mediation at (828)328-5297. I will share that if you look at Huddy’s license plate it reads LAWR. A little known secret is that those letters are the firm’s last four digits in it’s phone number 328-LAWR (5297).